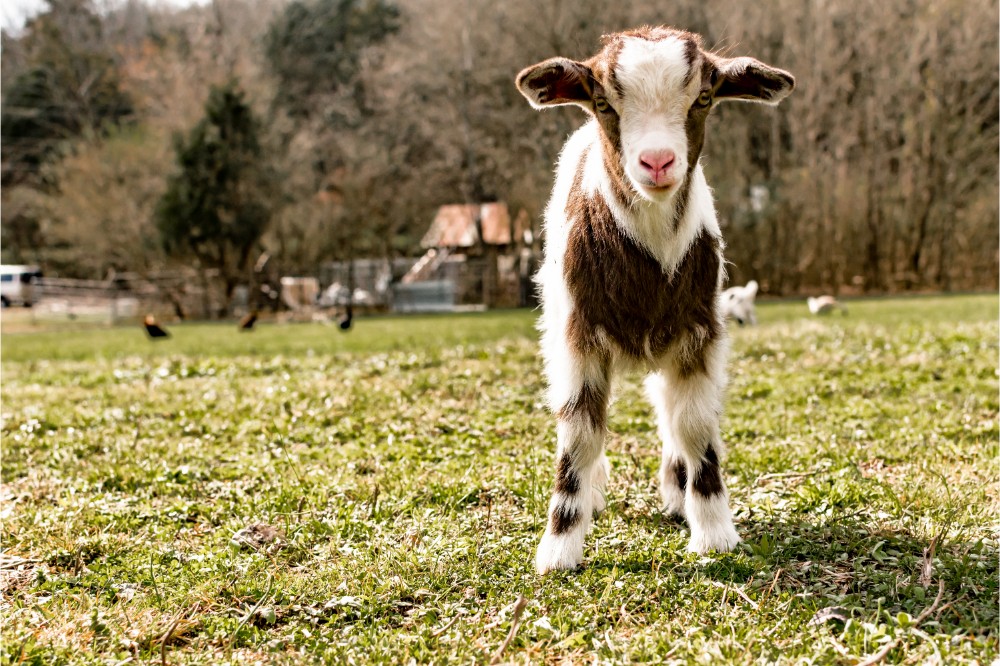 While the Wrangler is a blessing, it drinks fuel the same way I drink beer, I opt to cut the Alabama leg of the tour. This left me with an additional day in Nashville. I wake to the roosters screeching. It’s time to play with the animals.

The farm is home to a couple of cats, three cows, several goats, and a whole bunch of chickens, geese, and other fowl. Most of the chickens and birds scatter as I begin walking around, the ones that remain seem to not care about my presence.  The goats who I briefly met the morning before came to meet me after several yards of meandering. Two of them, Thelma and Louise, are one-month old. The former likes to be cuddled and will nuzzle into you, while her sister Louise likes to climb. As I’m kneeling down taking photos of Thelma, Louise takes advantage by using my crotched leg as a launching pad to get up to my back. Ever been licked by a cow?

It’s time for lunch and BBQ is on the mind. Heading towards Nashville, I make my way to Martin’s Bar-B-Que Joint in the Belmont/Hillsboro area. Orange soda and a half-slab of baby back ribs with greens beans and potato salad. It definitely hit the spot. As I eat, I look over a map to see what i want to do with this extra time here. Next stop… The Parthenon.

Built in 1897, The Parthenon in Centennial Park, Nashville, Tennessee, is a full-scale replica of the original Parthenon in Athens, Greece. From here, I bopped on over to Cool Stuff Weird Things, a vintage/antique/record shop. While there were a few items of interest, such as a big bull skull or a long metal sign with light bulbs that when turned on spells “music” or “beer” (both were available). Speaking of beer, it was time to have one at a Tennessee brewery. Southern Grist Brewing Company happens to have a location nearby in the Nations neighborhood. I go with an imperial New England style IPA, “Trespassing in Triviality” – what an ironic fitting name, not for the beer, but for this adventure. The sun has set and it hits me that tonight is the only time I’ll be able to explore Nashville at night. I decided to head Downtown. Before leaving, I picked up a pack of their rotating series “Mixed Greens” #34, a Double-dry hopped NEIPA with Azacca, Citra, and Idaho 7 hops. The street is hopping and it’s a Tuesday night! The only thing I can compare it to is a NYC street but only filled with bars playing country music and everything is honky-tonk themed. This is not my type of scene at all, but I’m very fascinated. I can only imagine how silly this street must be on a Saturday night.

After pacing the along the sidewalks a couple of blocks in each direction a few times, I enter the Ernest Tubb Record Shop. Their spinning three-panel sign with a bright neon guitar caught my attention. I walk in to browse and at the very back… An exhibit to none other, Loretta Lynn, a renowned country music singer-songwriter.

Moments after viewing the exhibit, a drunk faux cowboy stumbles in and starts singing some country song as loud as he could. There were only two elderly women working the front and bless their hearts, only told the guy to sing a bit quieter. He then opted to leave as he wanted to sing loudly, thanked them for their time and busted out the door onto Broadway singing at full volume. “The Alley will always be here, I expect… and I’ll stay here with it.” ~ David “Skull” Schulman

Continuing my night stroll, I come up to Printer’s Alley, a famous alley in between Third and Fourth Avenues. At the beginning of the 20th century, Printer’s Alley was home to thirteen publishers, ten print shops, and two large newspapers. A red old-fashioned sign hung on a metal-grate door attached to a stone and brick wall at the base of the historic Southern Turf Building, it read: “Wold Famous Skull’s Rainbow Room Entrance.” Let’s see what this place is about.

Originally opened in 1948 by David “Skull” Schulman, the venue has hosted the likes of Elvis Presley, Etta James, Johnny Cash, Bob Dylan, Jerry Lee Lewis, among others over the years. Tragically in 1998, the 80-year-old “Skull” was murdered inside his own nightclub during a robbery. Shortly thereafter, the club closed for 17 years until 2015 when it reopened, keeping in tradition and paying homage to the history of the venue. Immediately upon entering, I am captivated. A jazz lounge with a speakeasy atmosphere with music and even a late night burlesque show. I luckily find a seat by the corner of the bar, right by the stage where a phenomenal jazz four-piece are performing. They offer some local craft beer and I indulge with some escargot before my main entrée, a slow-roasted prime rib.

Back to the bus. There is a full day of brewery hopping and a concert to attend tomorrow.