While most do it in 3 days, Jack Kuenzle ran the traverse this past July, it took him 3h 38m 44s – setting the fastest known time. I, for whatever reason, decided to do it in 2 days. It was THE most challenging hike I have done. It’s a ~21 mile trek with roughly half completely exposed in the Alpine Zone. The stretch between Mount Madison and Mount Pierce has the most prolonged stretch of above-treeline hiking in the Eastern US. The risk of prolonged exposure to low temperatures and high winds is a concern, thunderstorms that can materialize quickly, and dense fog that limits visibility. The latter being the experience I had for the entire second day. I went along a variant of a northbound route, ascending up Webster Cliffs to Mount Jackson, in hindsight wish I did the opposite – for the afternoon views and how awful it was going up. A few great lookout points along the Webster Cliff Trail gives you a view down upon Crawford Notch. A pair of gray jays harassed me for some treats roughly halfway between Mount Webster and Mount Jackson. I tricked one to land on my hand while I had nothing to offer and the little bugger nipped my finger tip. Touché bird. Took rest and enjoyed some delicious minestrone soup at the Mizpah Hut while making the call to either hang for the afternoon and stay at the nearby Naumann Campsite or push to reach the Lakes of the Clouds Hut and catch sunset along the way.

From Mount Eisenhower to Mount Franklin was all basking in the glow of the evening sunset. A cotton candy sky, but gray clouds were coming in. The forecast I have is calling for higher winds and potential rain overnight. I arrived at the Lakes of the Clouds Hut a little bit before 20:00, and after 11 miles, was ready for bed. A note on the door stated that they were closed for renovations and that there is shelter in the emergency bunker if needed. After a half-lap around the building, I see a large iron door. Cranking the lever down, unlocking the door, I pry it open to reveal a small room with only wooden bunk beds inside. The smell of a dank basement fills the lungs. The two stack triple bunk beds are against the far walls and a loose window rattles in the wind. It’s a dungeon bunker. By the time I settle in and eat, clouds have taken over the sky which was shimmering with stars when I arrived. Little did I know, this would be the last time I would see the sky. It’s morning. Choking down a maple bacon sandwich from Dunkin Donuts I had stored away the day before, I set off to summit the mighty Mount Washington. At 6,288 feet above sea level, Washington is the highest peak in the Northeastern United States.

The summit experiences some of the most dangerous and erratic weather in the country. A windspeed of 231 miles per hour held the world record from 1934 until 1996, and still holds the record for highest measured wind speed not associated with a tornado or tropical cyclone. On January 16, 2004, the summit weather observation registered a temperature of −43.6 °F and sustained winds of 87.5 mph, making the wind chill −102.59 °F. Aside from roughly two weeks worth of days, the temperature around the summit is below 60 °F. As of 2019, over 160 people had died in the Presidential range, since records started being kept in 1849. A sign along the trail leading to the summit reads:

“STOP. The area ahead has the worst weather in America. Many have died there from exposure. Even in the summer. Turn back now if the weather is bad.” The fog at the summit of Mount Washington was no longer foggy, it was more like soggy. It was becoming so dense that it was borderline raining. On the summit, several crew professionals were going about their business and a handful of tourists were wandering about after the expensive drive up the mountain. Most taking selfies and switching who takes the photo and who poses with the summit sign. Having a long day in front of me and no views to be had, I decided to continue on. At that moment a bus unloads a few dozen people mere feet away from where I was sitting. Slowly a track forms out of the clouds. The Cog Train is the first mountain-climbing cog railway in the world. Every so often you could hear the engine whine and the wheels clatter. Out of the mist the train appeared like a ghostship in the sea. Must be one hell of a ride going up grades nearly 40%.

Mount Clay would be my next summit. Then to Jefferson, Adams, and finally Madison. Until the summit of Washington, I saw all but 5 people. The first day had an easy 25 encounters, seems much more isolated along the northerns. Only another 5 people since Washington to Jefferson and a last 5 humans to passerby from Jefferson to Adams. The clouds went on forever. Only a couple of times did they break enough for a glimpse of the land below. It’s like walking in a surreal, alien world. All you can see within the 30 feet of visibility is orange, brown, and a bit of green, everything else is a shade of gray. Taking a last rest at the Madison Hut, I secured a shuttle from Appalachia back to my vehicle located in Crawford Notch. Clock is ticking, I now have to be at the parking lot by a certain time. With a half hour before my ride arrives, I bust out of the forest from Valley Way.

While I may not have taken many photographs of this adventurous hike, and unlike how I go about just about every outing, this was about the challenge of completing this feat in 2 days – not completely about photos. I did gain 1.3% with tracing the guidebook and picked up 8 summits for the NH48 list. Not to mention how cool it is to walk the Appalachian Trail via Crawford Path, the oldest continuously used and maintained hiking trail in the country. Upon returning home, I have already begun planning loop hikes to explore the areas around all of these Presidential Range mountains and throughout the surrounding forests and wilderness. 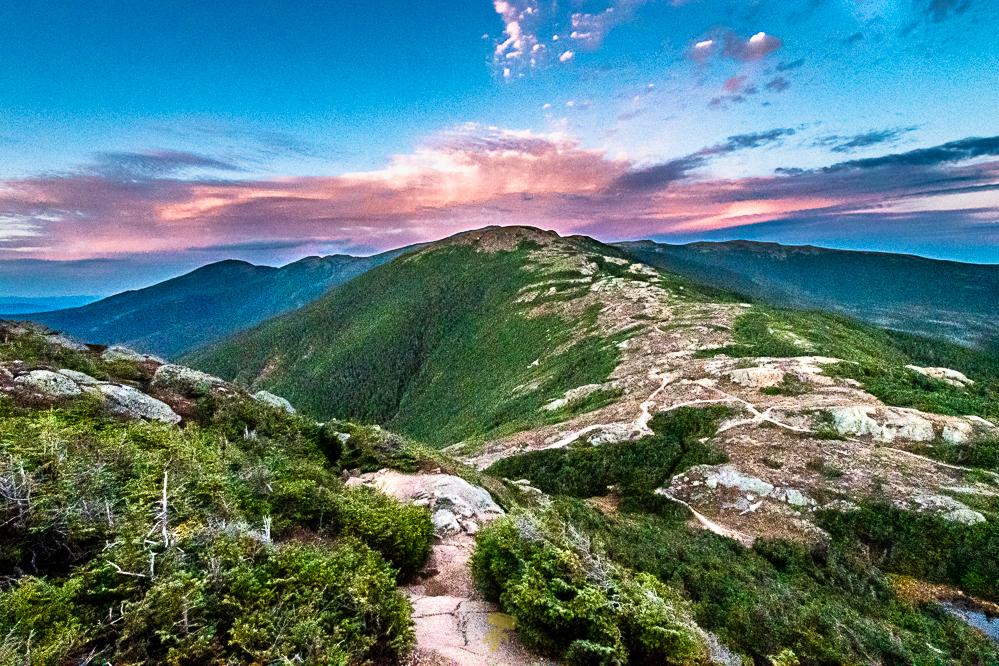 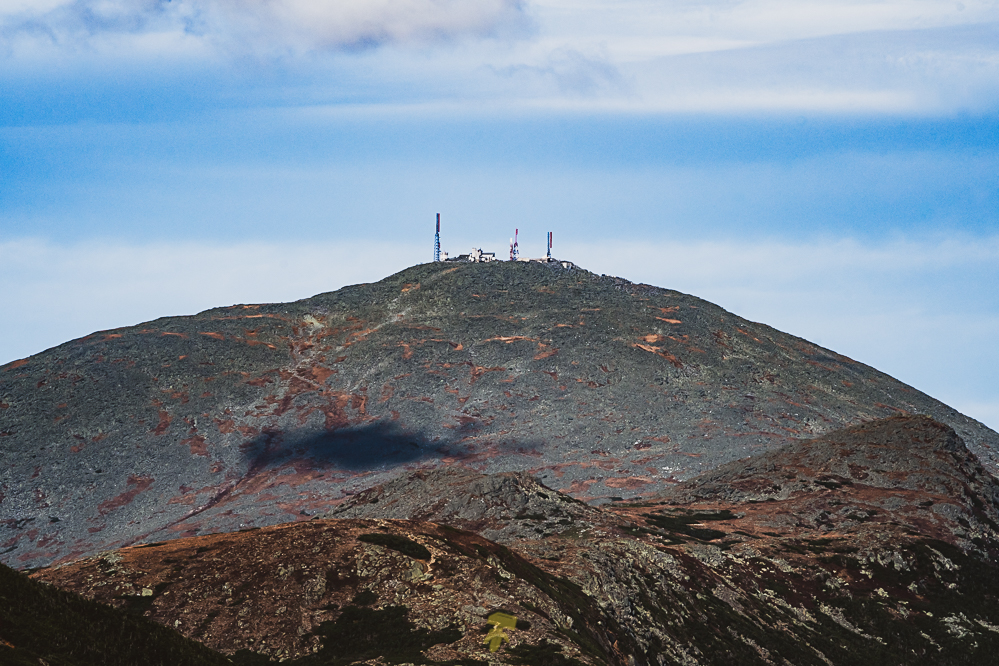 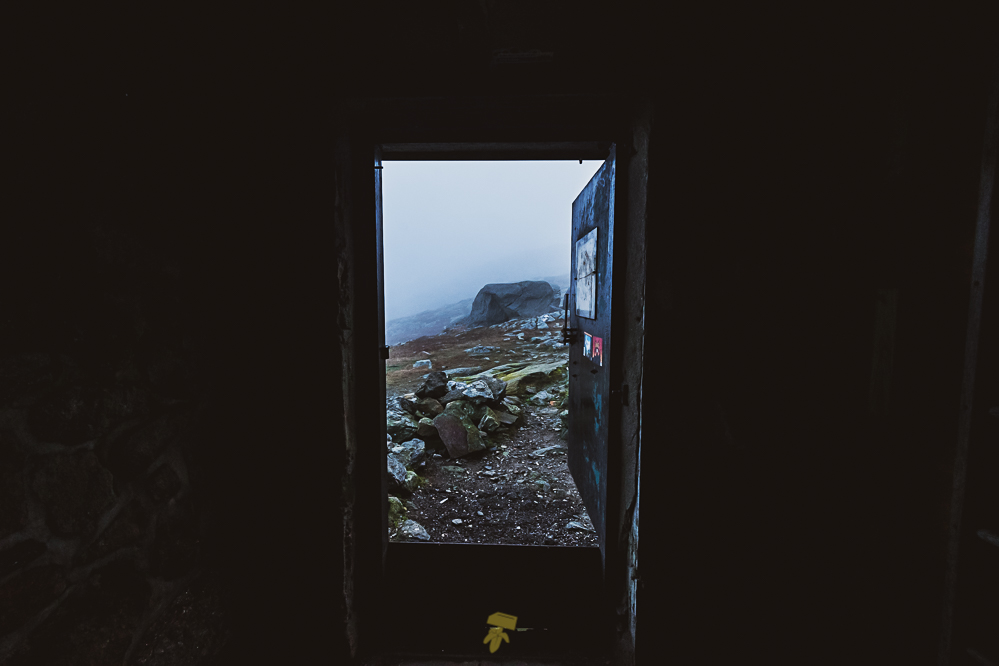 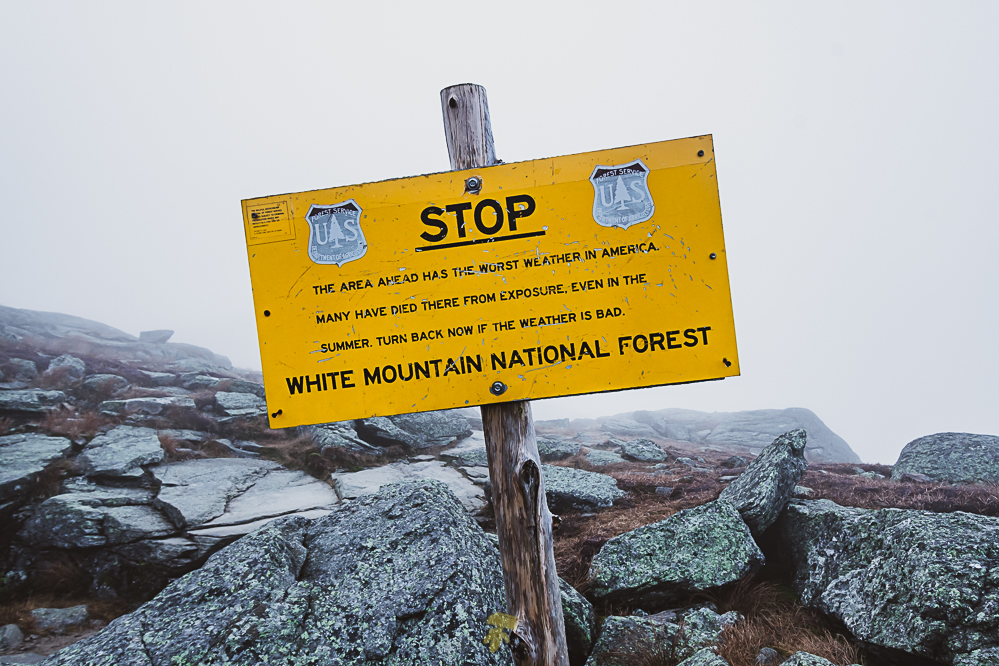 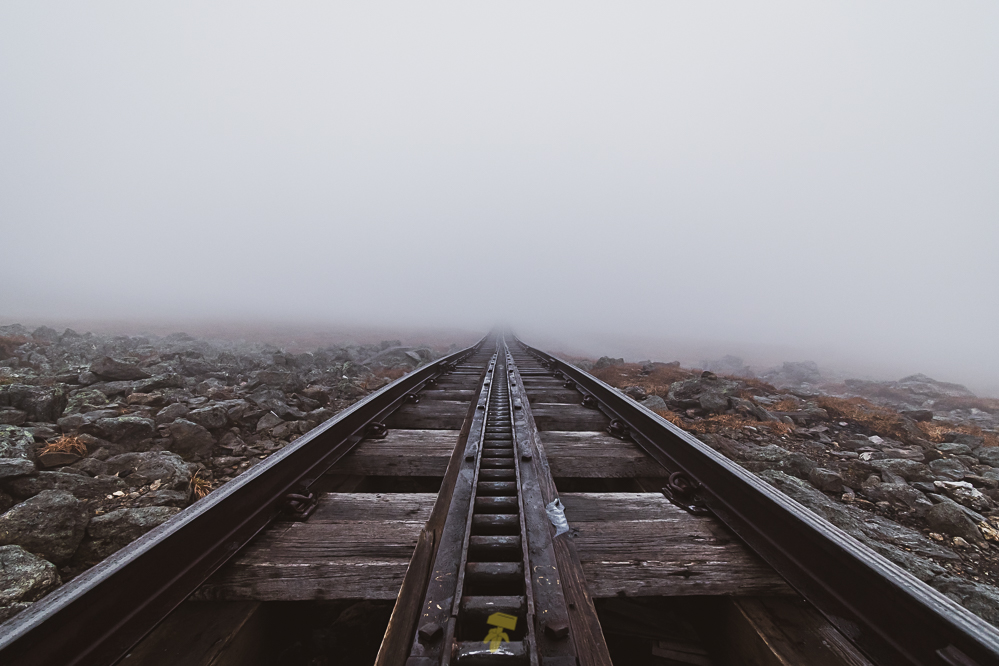 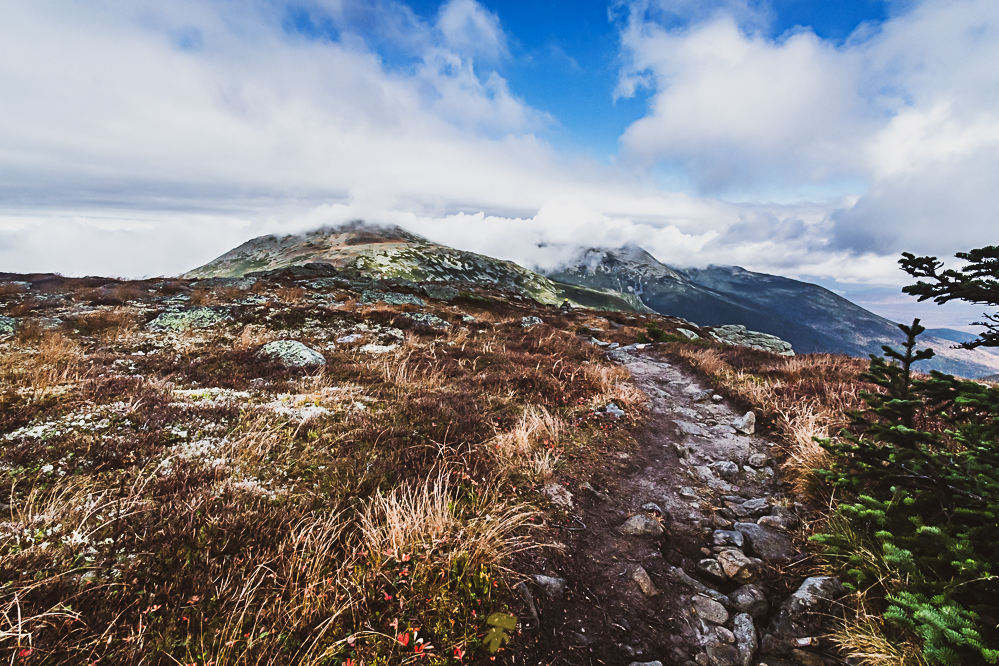 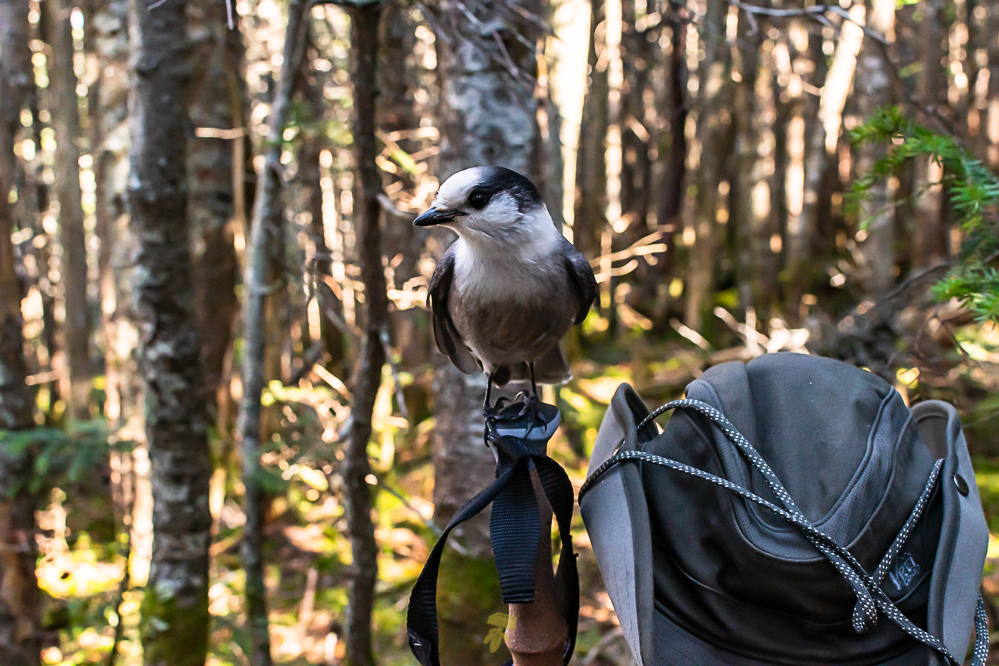 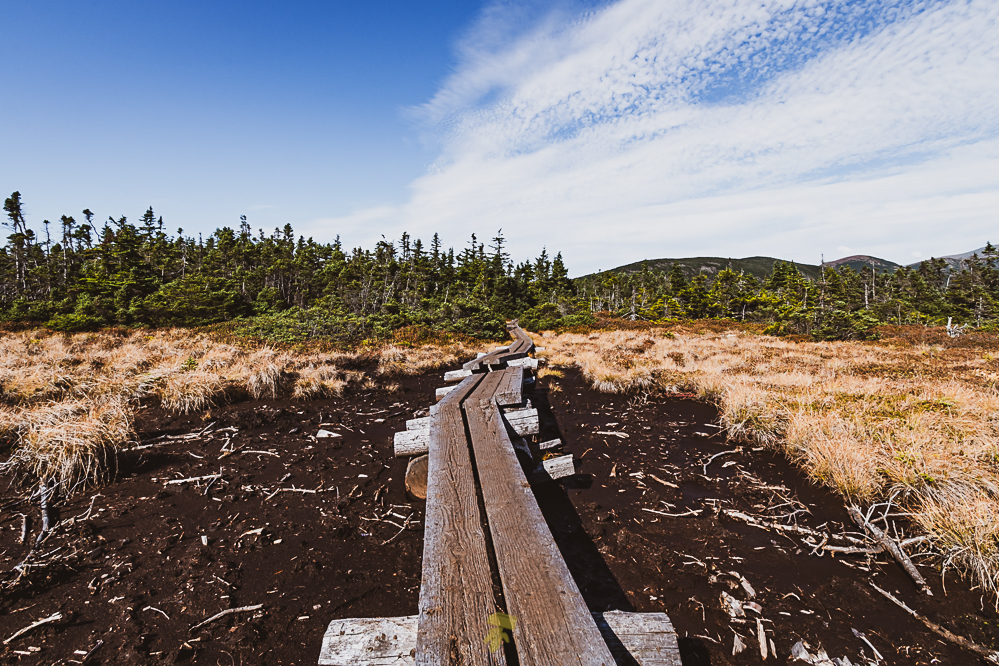